This section of the book brings forward the following questions for me. What would you (or I) do if an autoimmune disease were attacking your body bit-by-bit. If after multiple surgeries and steroid treatments you were legally blind and in agonizing pain?
How many hours a day would you spend trying to regain your sight if you had lost it?

This question is key because, as author Norman Doige points out, in neuroplastic methods, the engagement of the seeking individual is a must. The more challenging the situation, the more one needs to be full immersed in healing. This is the message of David Webber’s story. And truthfully it was the message of John Pepper walking his way out of Parkinson’s symptoms from chapter 2 and those recovering from chronic pain in chapter 1.

In chapter six of this book, Doidge introduces us to David Webber, who I have had the pleasure of meeting. At age 43, he went from a red eye to a diagnosis of uveitis, an autoimmune disease. Uveitis causes 10% of all blindness in the U.S. Next his thyroid was attacked and had to be surgical removed. Over 5 years he received regular steroid injections in the orbital area, but the pressure in his eyes led to several cataracts and glaucoma. Both lenses were removed in two separate operations. Two more surgeries vacuumed out the gel inside his eye balls which contained dead tissue. After one of the cataract surgeries, his right eye became infection and “dead” per his ophthalmologist.

Five surgeries later, with no significant improvement in sight, and physical pain that was overwhelming and steroids which he was advised to be on for life all took their toll. Constant anxiety, loss of function, loss of career were the results. Legal blindness begins at 20/200. Webber was 20/800. He was told he would be blind the rest of his life.

Webber took advantage of the services at the local society for the blind, but he did not give up hope. An avid reader, he longed to see the words on a page again. “I bought books based on their titles, just to bring them home and put them on my shelves with the hope that someday I would be able to read them.” When Doidge asked him what drove that hope. He answered, “Blind faith … and I wanted to see my son and watch him grow.”

One day his primary care doctor passed him information about the Bates Method. William Bates found that vision was not a passive sensory process but requires movement and deprogramming of habitual movements that suppress eyesight. Bates developed a system of exercises that allowed many clients to decrease the power of the corrective lenses or even leave glasses behind. Like Moshe Feldenkrais, Bates was interested in muscle tonus and the brains involvement in vision. Feldenkrais was very definitely influenced by William Bates’ pioneering work. Bates was ostracized by the medical profession. I suspect you will find most ophthalmologists will still do so today. And this is why Doidge’s book is so important. We need to give a hard look at these less invasive approaches.

Exploring the Bates Vision Method, David Webber discovered the work of Meir Schneider. Schneider, born with vision issues, also had failed surgeries and vision of 20/2000. But working with the Bates method up to 13 hours a day, he eventually brought his vision to 20/60. I hope you caught that: 13 HOURS A DAY. Schneider decided to develop his own approach to restoring vision which is highly influenced by Bates’ work.

A Change of Course

Webber was a practitioner of Eastern philosophy but with his health, he had followed Western physicians. Once the ophthalmologist said he had nothing more to offer, Webber began to go back to his yoga and Buddhist meditation roots. Visiting one of his meditation teachers, Namgyal Rinpoche, he was passed four exercises used by monks of old to heal their eyes.

But Webber soon found that he simply couldn’t do these “low tech” exercises. The pain was too intense. He was invited by Marion Harris, a Feldenkrais® practitioner in Toronto (whom I adore) to Feldenkrais Awareness Through Movement® class for relaxation. And so he began to roll on the floor and actually find some enjoyment. I love this! In the midst of all of the pain, he found some enjoyment. Anxiety and tension began to reduce. Within a year he decided to train as a Feldenkrais practitioner because sight was optional to lead verbal lessons or gently move client’s limbs. He could no longer pursue his previous occupation in IT.

In his Feldenkrais training, he discovered a Feldenkrais Awareness Through Movement lesson called “Covering the Eyes.” He recognized it as very similar to one of the exercises his Buddhist teacher had gifted him and that Bates used in his work. What he could not previously do, he was now able to do. His nervous system had calmed and Feldenkrais added helpful cues. As soon as he began the lesson he feel immediate, graphic changes.

Here is another example where Norman Doidge doesn’t cut corners. He wonderfully describes the actually lesson, Webber’s response, and the reasons behind how it worked for him. Webber generously shares with us not just his physical process but his emotional healing.

His first moment of a red eye began in 1996. He started doing the Feldenkrais Method in 1999. He did daily awareness exercises based in all his studies and created a few inventions of his own. He slowly tapered off steroids. By 2009, his right eye which has been previously pronounced “dead” had improved from 20/800 to 20/200. While visiting the opthalmologist, he felt a clear call to help the waiting room of people struggling with vision. He felt even more was possible for himself and others so he continued to piece together the Awareness Through Movement lessons that seemed most important to sight. Bell Hand –

a lesson some of you have done with me or your local Feldenkrais practitioner, for example, as a way of clarifying the hand-eye connection. He has his own Seeing Clearly workshops and audio products he now offers.

He also received private Feldenkrais Functional Integration® lessons. One with Carl Ginsburg, a senior Feldenkrais trainer, allowed him to gradual feel the tonus throughout his entire body. “From inside, my breathing pushed against what felt like a wall running along the plane of my back … I saw in a flash that this wall was anxiety and fear compacted. At the same time, I also felt it to be a structural phenomenon—the muscles at the back of my eyes, diaphragm and pelvis were gripping and shaped by this density like tree roots growing in rock ground. While the fear I felt was very real, the wonder at experiencing it in this new way dissolved my need to be afraid. I felt entirely safe to breathe.”

As he stood up from the lesson, “When I walked about, it was obvious to me that this wall—built of fear—had been an unknown art of myself, related to my eyes, and had been defining my posture for years.” As he walked, the fear “dissolved on its own account like smoke.”

I will end where I started. How many hours a day or even how many days a week are any of us willing to engage in our own health and healing? Hope may lie in the answer to this question.

Yes, we need teachers or practitioners, but we also need to engage daily with hope and courage. This is my take-away from this inspiring chapter. 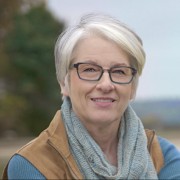